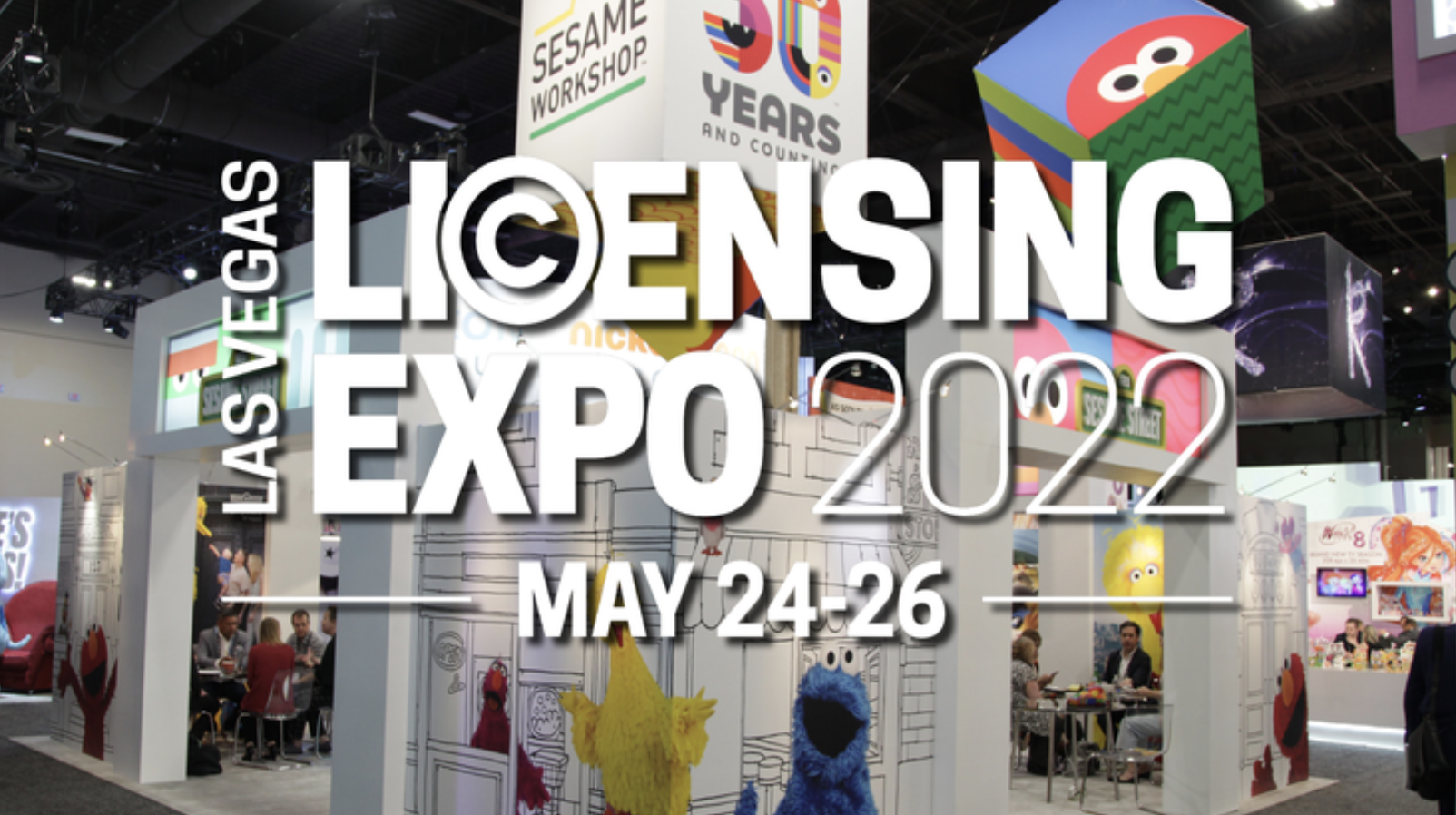 Licensing Expo is a fantastic event to find new licensing opportunities for your IP. Licensing professionals from more than 70 countries will come together to Las Vegas this May in search of potential partners to buddy up with - though, it’s easy to overlook what could potentially be the perfect match for your property.

Consumer products and brands often take centre stage at the show. In fact, you might wonder why gaming is so… scarce. Even though this industry has been growing 10% year on year, and holds hundreds of brilliant opportunities for IP holders, the gaming industry is still playing catch up when it comes to licensing events. This year however, we encourage you to explore opportunities in a truly global consumer space, an interactive digital market - video games & interactive entertainment.

Unencumbered by the disruptions in global supply and production, with the ability to be in your audience's home and hand 24/7, the gaming space provides new opportunities and diverse players for your brands and IP - from casual mobile games to new Web 3.0 blockchain titles.

At the Expo, you'll find talented publishers and game developers offering perfectly aligned opportunities to reach your audience in a space they have access to anywhere, anytime. So if you’re a licensor heading down this year, we suggest keeping your eyes peeled, specifically for opportunities in games. In this article, we’ll do our best to not only get you up to speed as to why, but also how to use games to reach your IP's audience.

Why turn your attention to gaming?

The gaming space is evolving. Last year, the gaming industry brought in over $200 billion in global revenue, growing 19% year on year. That’s twice the revenue that the film and music industry made, combined. We’re also looking at around 2.7 billion video game players globally, meaning 1 in 3 people are gamers.

We’ve lost track of how many genres, platforms, and new technologies there are behind gaming. Publishers review thousands of games annually, and just applying your IP to one game is barely scraping the surface. The video games industry offers exposure to a truly global market, which is one of the reasons we created Layer (but we’ll talk about that later).

Using IP in gaming is still fresh. Only 25% of the top 200 grossing games use licensed IP, and if we talk about mobile, the top 30% of mobile games use licensed IP. However, only 8% of licensors are taking their IP content into games, despite gaming being one of the fastest-growing markets.

There are hundreds of different types of games on the market now. Audience sizes and diversity is growing, and the gender split is almost even in the US, with the number of female players increasing from 38% to 45% in 2021.

The gaming audience is vast and there are games for everyone, which means there’s an opportunity for almost any brand.

3. Opportunities of all sizes

Despite all the good news, you won’t find as many gaming companies at events like Licensing Expo 2022. You might see the larger studios, the ones that create the big AAA titles and historically, these are the types of games that most licensors worked with. In today's world though, we're no longer limited to traditional large scale shooters and fantasy games. Now, there are thousands of publishers and developers of all sizes searching for popular content and IP to attract and engage players.

These developers also offer the opportunity for you to explore new markets like the metaverse and Web 3.0, which would otherwise be trickier to reach. Smaller developers and publishers often don’t have the resources of the larger teams and might not even be at an event like the Licensing Expo. That said, they're out there looking for content and IP to help their game reach their target market - and working with smaller developers is usually a quicker and easier process with a lot less red tape.

The proof is already out there

We’ve laid down the stats and gone over the whats and the whys. So to get your creative juices flowing, we've cherry-picked a few notable collaborations that we think have done it right.

Rocket League is a brilliant soccer game on wheels. If you haven’t played it before, it’s both a cooperative and competitive title, but it’s an incredibly social and family-friendly game. Although it may look like it’s for boys, the audience is varied – from competitive players to casual gamers and families.

GREAT SCOTT! The @BacktotheFuture DeLorean Time Machine returns along with a NEW Reel Life Decal and NEW wheels! Get it all in the Item Shop before it hits 88 MPH and is gone! pic.twitter.com/xfPG7UvHHE

The team behind this game (Psyonix & Epic Games) saw a brilliant opportunity. They collaborated with Universal Pictures and featured the famous DeLorean from Back to the Future to promote their Summer event. This partnership pretty much appealed to their entire audience: The boy racers who want a fast car, the collectors, and the parents of young kids who grew up watching Back to the Future.

When Nintendo released Animal Crossing: New Horizons, it was sweet relief for thousands of players during lockdown. But it wasn’t just everyday players in the game. Many brands seized this opportunity and created their own islands in-game that players could visit, and one of those companies was Gucci.

You’d think that this was an odd initiative from Gucci, being that Animal Crossing’s primary audience is on the younger side. But it worked! They opted to target a younger, more aspirational audience and to get it right, Gucci collaborated with three known gamers: LexPlay, Kang Gaming, and Canton.Crossing.

Together, they designed the GG Island and on it, players were welcomed by the face of Gucci Guilty, Jared Leto, and were then encouraged to try out a range of mini-games designed by the beauty brand and influencers.

Blair Witch teams up with Dorian to inspire new stories

Last year, Lionsgate paired up with the storytelling platform, Dorian. Together, they encouraged creators to make a new interactive game based on Lionsgate’s famous film, The Blair Witch Project.

This was one of the more creative collaborations we’ve seen. Dorian, a game platform for female creators, lets its users turn their fiction into a game. No coding experience needed and Lionsgate saw this as a brilliant opportunity to promote its films.

This campaign was a great initiative from both sides, giving them exposure while supporting Dorian’s community.

We know that this is a more recent announcement (and not something launched in 2021) but we couldn’t resist giving this a shoutout. The hit Netflix show, Queer Eye, is building an app with Project Makeover, which is Magic Tavern’s most downloaded mobile game.

The show follows a team of creatives as they transform people’s looks and jazz up their outfits and lets the player redecorate houses and ‘transform drab clients into stylish trend-setting mavens’, as they put it. So this really is just a match made in heaven, and a brilliant example of a collaboration done right. We can’t wait to see how this turns out.

We can help you find new talent

We hope we’ve convinced you of two things. One, any type of license can work with a game, and two, your options are a lot wider than you may think. So when you head to the Licensing Expo 2022 this year, keep an eye out for any interesting (and different) opportunities.

But don’t feel put out though if you don’t find the perfect game to buddy with. As we mentioned before, the gaming space is growing, and fast. It’s not uncommon for this industry to be underrepresented at these events. Layer can help align your IP and licensing efforts to get coverage across the wide world of gaming.

It’s why Layer came about in the first place. We built a platform that does a lot of this legwork for you, and we pair the right licensors with the best licensees in the world of interactive entertainment. We’re attending Licensing Expo 2022, so if you fancy some advice about which genres or specific games will work best for you, or just fancy a catch-up, then get in touch. We’d love to have a chat and you can reach us at hello@layerlicensing.com

The rich text element allows you to create and format headings, paragraphs, blockquotes, images, and video all in one place instead of having to add and format them individually. Just double-click and easily create content.

Headings, paragraphs, blockquotes, figures, images, and figure captions can all be styled after a class is added to the rich text element using the "When inside of" nested selector system.